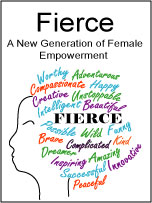 Welcome to week fourteen of sharing excerpts from the book, Fierce: A New Generation of Female Empowerment. This book is for those who have a desire to get the most out of life. Those who want to make positive change, but are not sure how to make it happen. It is for any age female who needs a reminder of how fierce they can be. It is for young women who will soon be out of high school and on their way to college or some other adventure. Share these posts with all the girls and women in your life.  Enjoy!

We live in a world with billions of people with different views, personalities and beliefs. It is important for all people to be treated with respect. Hating and judging people is not healthy. You don’t have to like everybody, but hate is a waste of time and a poisonous feeling to share.  It is okay when others believe different than you. They have every right to think, feel, and express those beliefs. It is not up to you or me to restrict anyone from being themselves. You can be any skin color, sexual orientation, or believe in any religion and create positive change. You cannot create positive change based on hate. Judging others is silly. If everybody on this planet had the same beliefs we would stagnate. Our differences inspire creativity.

Our survival as a species relies on working together to share new ideas so we can solve problems. If we refuse to work with people who have different beliefs, than we cannot present a unified front against problems. This means that we cannot work to alleviate poverty, end wars, or stop discrimination. Civil and human rights are not won by a single group of people who are oppressed, but rather by reaching out to others who are not oppressed to use their voices as well. To use a rather corny cliché, “We are all in this together”. As the great social worker and activist Jane Addams said “Civilization is a method of living, an attitude of equal respect for all men.”

What can you do to stamp out stereotypes that cause fear about certain people or certain beliefs? Start by not using them yourself. When family and friends voice negative opinions of a person’s race, religion, country or disability they give you an opportunity to calmly share how that makes you feel bad and ask them why they feel that way. Start a dialogue because even if you do not change someone’s point of view, it gives you a chance to reevaluate how much time you spend with that person. In our families and in tight knit circles of friends it can be impossible to ignore or never see someone that we don’t like, but we can always choose to limit the time we spend around that person. We can instead spend our time to grow relationships with those we do love and get along with.

LGBTQ! It’s okay to love someone of the same sex or both sexes equally. It is okay to feel like a man in a woman’s body or vice versa. It is okay to have an operation to change your sex so you can be who you truly feel like whom you are inside. It is okay to dress up and make yourself look like someone of a different gender or even both genders at once. The ability to express ourselves is a natural trait.

It is NOT okay to bully or harass a person because they are lesbian, gay, bisexual, transgender, or queer. None of these sexual orientations are wrong. Having a non heterosexual orientation does not make a person evil or a sinner. It is simply the way that person was born. When angry people hurt someone because they are uncomfortable with their orientation, it is a problem they need to fix. The person who is different is not at fault. We cannot be blamed for expressing our true self. It is not okay to try and “cure” someone’s sexual desires. There are clinics that attempt to cure homosexuality. These hateful scams are a way of forcing people to deny their basic humanity and that is not what a change maker does.

It is not okay to use violence because you think another belief is bad. It is not okay to force your faith onto anyone else. The only reasons for being hateful are ignorance and fear. Look at any particular religion in different countries and you will see how that culture has created differences than other countries. That is because the culture where we live influences how and what we believe. There is a differing opinion across the world that in the cases of Buddhism, Christianity and Islam; Buddha, Jesus and Mohammed were both gods and prophets OR philosophers and teachers. Where you live and what your culture says tends to define the answer.